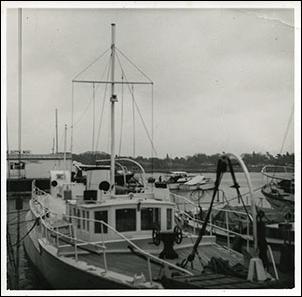 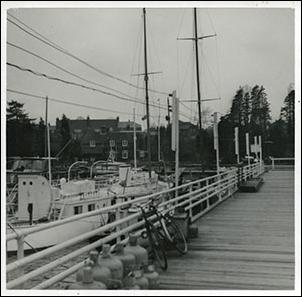 Glala remained in the National Fire Service in Liverpool at the end of the war. She was put up for sale on the 30th April 1946 but the 1947 edition of Lloyd’s Register of Yachts shows that she was still owned by the government then. The entry in the register includes a note that she now has new decks made of Kauri Pine, so she must have been rebuilt while still in government ownership. Photographs taken a few years later show that the accommodation aft had been rebuilt, the funnel had been shortened and there was an unusual companionway hatch on the afterdeck.

By 1948 she was owned by Roy Baker who had bought her for £7000* and then, by 1952, by his wife Mrs Margaret H. Baker. According to her daughter Glala was kept on the Thames at Richmond at this time.

She also appears to have been at Hoo on the River Medway for a time around 1952, with an F. Lloyd living on board.

In 1959 Glala was owned by Lt Jack Marshall R.N.R. and from 1960 he was a joint owner with three others: B.V. Devitt, Mrs June Breton and R. Russell. Her registration shows her home port as Hoo, on the Medway, but she is said to have been in use at Swanage in Dorset at this time.