When war broke out the Port of London and the Thames Estuary had to be protected. In some respects the defences were very sophisticated; a system of metal-detecting induction loops had been laid on the sea bed around the naval base at Sheerness that could detect and track vessels including submarines. These boom defences were maintained using adapted fishing boats; trawlers and drifters, the Admiralty also requisitioned a number of yachts. In October 1939, just two months into the war, Glala became a Harbour Defence Patrol Yacht stationed at Sheerness.

A photograph taken in 1940 shows Glala painted grey and wearing a white ensign. There are some barrel shaped objects on the stern which look about the right size to be Mk VII depth charges. There also appears to be a machine gun on the foredeck. From her base at Sheerness she would have been patrolling the Thames Estuary and the River Medway.

Requisitioned meant that she was effectively being hired and, until the Ministry of War Transport compulsorily acquired her in 1943, they were paying AEC £54.10.0 a month (about £2000 in today’s money).

Glala appears in the naval records of Saturday, 13 January 1940;

“Sloop BITTERN found a German mine which she towed towards Sheerness. It was secured to the Nord Buoy and harbour defence patrol yacht GLALA (51grt) beached the mine from there.” 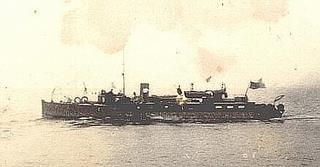